My fiancé is such an awesome Dad to our two adorable, energetic kids. He’s playful, patient (most of the time), and knows how to communicate well with them. Maybe the kids and I don’t say it enough, but we appreciate him very much.

One thing I don’t want, is his parenting skills to be overlooked just because he’s The Dad. That’s just so not cool.

Sure he has his parent-fails, but so do I- maybe even more so.

We all know how important mothers are to their children and what a big part they play in their lives. But fathers play a big role, too, just as important as Moms.

My kids really do look up to their father. They adore him in every way and I can always tell when they’re missing him while he’s at work (we literally count down the hours until he’s home).

While they do look to me for comfort when they’re hurt, sick, or tired, they look to him for FUN and SECURITY. When Dad’s home, they know they’re safe; nothing can ever hurt them.

Fathers are just… a different type of parent.

Not in a bad way, either, but in a super awesome, confident way. They don’t second guess their decisions, and they don’t feel guilt like mother’s do.

Father’s we’re not put here just to be the babysitters while Mom goes grocery shopping.

And they shouldn’t be treated like they’re just a babysitter, either. When I leave my kids alone with their father, I don’t think anything of it. He’s fully capable of taking care of his two kids, as he is their father. He’s fully trusted, as he should be. 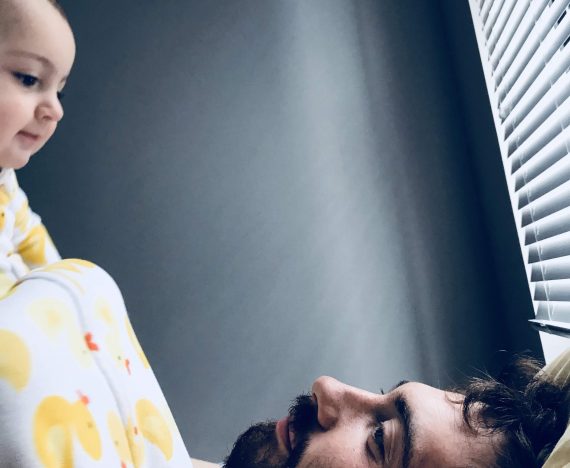 When my fiancé is home, he’s HERE and a very active parent. He’s not relaxing on the couch because he had a busy day at work. He’s in full “Dadda-mode” and the kids LOVE it.

He gives the baths if needed, feeds dinner or before-bed-time snacks, changes all the diapers, and gives me a few minutes of “relaxation.” Whatever the kids need during that time, he gets it done. Is it hard work? No, maybe not. But after a long day on his feet, I bet he just wants to sit down.

But he doesn’t. We split up the responsibilities of our children because we understand that we are a team. Of course some days one of us might need an extra hour of sleep or a little break, and that’s ok, too. We’re not perfect.

While it’s tough being the parent who is supposed to have all the answers and have the secret formula to raising children perfectly (moms), I bet it’s also hard being the parent who feels left out and doesn’t get asked the questions like “Is your baby feeling better” or “Where are the kids tonight?”

Is it odd that dads don’t get to answer any specific questions about their kids?

Maybe not; I get it, we’re all accustomed to a certain way and that way is: Moms always have the answer and they always know best (we don’t, though. I literally know nothing and wing everything).

Well guess what? I can almost guarantee that Dad will know the answer to those and any questions that they’re asked. And they can make pretty good decisions, too.

We are both the decision maker.

Look, I know it seems like the mother is always making the decisions when it comes to anything child-related, but that is not the case here. While I’m sure that’s true in some households, it’s not in mine.

My children’s father has just as much of a voice as I do, and that will never change.

I always hear comments like “You’re so lucky that he helps at home,” or “Must be nice to have help with your kids.” But it really doesn’t make any sense. We are both the parents. We both decided to have these kids.

You know, there ARE dads who stay at home with their kids, so that the mother can work. Ever heard of a stay at home dad? I have. My fiancé was one at one point. He did a lot of the home responsibilities and took such great care of our daughter.

I know back in the day Mom’s were supposed to take care of the children and do all the house work, and Dad’s were supposed to go to work and bring home the money, but that’s not the case anymore. It’s weird that it was even a thing back then, amiright?

At the end of the day, Dads are parents, too, and should be treated as such. Don’t make them feel like they’re not as important as mothers.

Enter your name and email and get weekly blog updates!

Introduce yourself and your program
Your information will *never* be shared or sold to a 3rd party.
25shares